You can make levels for Rabbit Escape!

If you’d like to help promote Rabbit Escape, my free software Android/PC game, how about a t-shirt?

Use the link below to design your shirt: 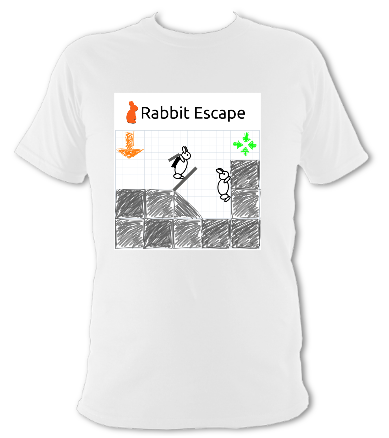 Note: there’s no profit in this for us – it’s just for promotion. If you’d like to contribute financially, please donate on Patreon or buy a copy on the Play Store. Thank you!

The newest feature of Rabbit Escape, water, has been brewing a long time, but we now think it’s ready:

Water can flow, it can put out fires, and it can drown rabbits.

Rabbots seem to be immune though…

Check out the 20 new levels we have released! (This makes a total of 180 levels.)

It works on Windows, Linux, Mac OS and Android.

In my previous post I examined the performance of various drawing operations in Java 2D rendering. Here I look at some specifics around rendering images, with an eye to finding optimisations I can apply to my game Rabbit Escape.

You can find the code here: gitlab.com/andybalaam/java-2d-performance.

I’d be grateful if someone who knows more about it can recommend how to improve my program to reduce this impact – I suspect there may be tricks I can do around setComposite or setRenderingHint or enabling/encouraging hardware acceleration.

The code for a single image is:

and for the small images it is:

The single large image was rendered at 74 FPS, whereas covering the same area using repeated copies of 100 images was rendered at 80 FPS. I ran this test several times because I found the result surprising, and it was consistent every time.

I have to assume some caching (possibly via accelerated graphics) of the small images is the explanation.

Drawing images off the side of the screen

Advice: check whether images are on-screen, and avoid drawing them if not.

(Lots of small images covering an area, or a single larger image.)

Please do get back to me with tips about how to improve the performance of my experimental code.

I want to remodel the desktop UI of my game Rabbit Escape to be more convenient and nicer looking, so I took a new look at game-loop-style graphics rendering onto a canvas in a Java 2D (Swing) UI.

Specifically, how fast can it be, and what pitfalls should I avoid when I’m doing it?

You can find the full code (written in Kotlin) at gitlab.com/andybalaam/java-2d-performance.

Basically, we make a JFrame and a Canvas and tell them not to listen to repaints (i.e. we control their drawing).

Then we add any buttons to the JFrame, and the canvas last (so it displays behind):

Now we make the canvas double-buffered and get hold of a buffer image for it:

Then inside a tight loop we draw onto the buffer image:

and then swap the buffers:

I decided to compare everything against drawing 20 rectangles at random points on the screen, since that seems like a minimal requirement for a game.

I didn’t do any statistics on these numbers because I am too lazy. Feel free to do it properly and let me know the results – I will happily update the article.

When I reduced the number of rectangles to do less drawing work, I saw small improvements in performance. In the small window, drawing 2 rectangles instead of 20 increased the frame rate from 553 to 639, but there is a lot of noise in those results, and other runs were much closer. In the large window, the same reduction improved the frame rate from 87 to 92. This is not a huge speed-up, showing that drawing rectangles is pretty fast.

When I added 20 small images (40×40 pixels) to be drawn in each frame, the performance was almost unchanged. In the small window, the run showing 20 images per frame (as well as rectangle) actually ran faster than the one without (561 FPS versus 553), suggesting the difference is negligible and I should do some statistics. In the large window, the 20 images version ran at exactly the same speed (87 FPS).

So, it looks like drawing small images costs almost nothing.

When I moved to large images (400×400 pixels), the small window slowed down from 553 to 446 FPS, and the large window slowed from 87 to 73 FPS, so larger images clearly have an impact, and we will need to limit the number and size of images to keep the frame rate acceptable.

Scaling images on the fly

You can scale an image on the fly as you draw onto a Canvas. (Spoiler: don’t do this!)

Note the 10-argument form of drawImage is being used. You can be sure you have avoided this situation if you use the 4-argument form from the previous section.

Note: the resulting image is the same size every time, and the Java documentation implies that scaled images may be cached by the system, but I saw a huge slow-down when using the 10-argument form of drawImage above.

On-the-fly scaled images slowed the small window from 446 to 67 FPS(!), and the large window from 73 to 31 FPS, meaning the exact same rendering took over twice as long.

Advice: check you are not using one of the drawImage overloads that scales images! Pre-scale them yourself (e.g. with getScaledInstance as I did here).

had a similar impact to drawing small images – i.e. it only affected the performance very slightly and is generally quite fast. The small window slowed from 553 to 581 FPS, and the large window from 87 to 88.

Creating the font every time (as shown above) slowed the process a little more, so it is worth moving the font creation out of the game loop and only doing it once. The slowdown just for creating the font was 581 to 572 FPS in the small window, and 88 to 86 FPS in the large.

By adding Button widgets to the JFrame before the Canvas, I was able to display them in front. Their rendering and focus worked as expected, and they had no impact at all on performance.

The same was true when I tried adding these widgets in front of images rendered on the canvas (instead of rectangles).

Turning everything up to 11

When I added everything I had tested all at the same time: rectangles, text with a new font every time, large unscaled images, and large window, the frame rate reduced to 30 FPS. This is a little slow for a game already, and if we had more images to draw it could get even worse. However, when I pre-scaled the images the frame rate went up to 72 FPS, showing that Java is capable of running a game at an acceptable frame rate on my machine, so long as we are careful how we use it.

Please do get back to me with tips about how to improve the performance of my experimental code.