Career progression is an important issue in the development of some software systems, but its impact is rarely discussed, let along researched. A common consequence of career progression is that a project looses a member of staff, e.g., they move to work on a different project, or leave the company. Hiring staff and promoting staff are related neglected research areas.

Understanding the initial and ongoing development of non-trivial software systems requires an understanding of the career progression, and expectations of progression, of the people working on the system.

Effectively working on a software system requires some amount of knowledge of how it operates, or is intended to operate. The loss of a person with working knowledge of a system reduces the rate at which a project can be further developed. It takes time to find a suitable replacement, and for that person’s knowledge of the behavior of the existing system to reach a workable level.

We know that most software is short-lived, but know almost nothing about the involvement-lifetime of those who work on software systems.

There has been some research studying the durations over which people have been involved with individual Open source projects. However, I don’t believe the findings from this research, because I think that non-paid involvement on an Open source project has very different duration and motivation characteristics than a paying job (there are also data cleaning issues around the same person using multiple email addresses, and people working in small groups with one person submitting code).

Detailed employment data, in bulk, has commercial value, and so is rarely freely available. It is possible to scrape data from the adverts of job websites, but this only provides information about the kinds of jobs available, not the people employed.

LinkedIn contains lots of detailed employment history, and the US courts have ruled that it is not illegal to scrape this data. It’s on my list of things to do, and I keep an eye out for others making such data available.

The National Longitudinal Survey of Youth has followed the lives of 10k+ people since 1979 (people were asked to detail their lives in periodic surveys). Using this data, Joseph, Boh, Ang, and Slaughter investigated the job categories within the career paths of 500 people who had worked in a technical IT role. The plot below shows the career paths of people who had spent at least five years working in an IT role (code+data): 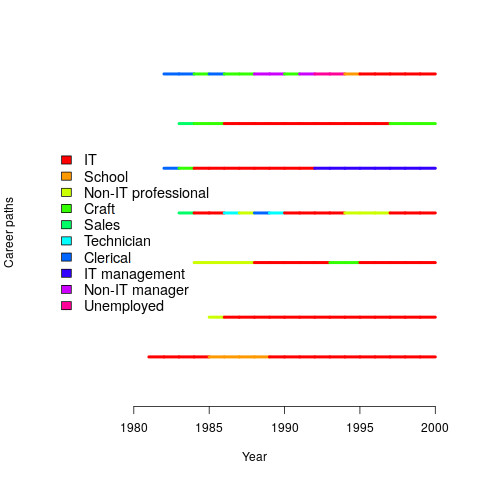 Employment history provides an upper bound for the time that a person is likely to have worked on a project (being employed to work on an Open source project while, over time, working at multiple companies is an edge case).

A company may have employees simultaneously working on multiple projects, spending a percentage of their time on each. How big a resource impact is the loss of such a person? Were they simply the same kind of cog in multiple projects, or did they play an important synchronization role across projects? Details on all the projects a person worked on would help answer some questions.

There are systems that are developed and maintained by essentially one person over many years. These get written about and celebrated, but are comparatively rare.

One of the more reliable ways of estimating developer productivity is to measure the impact of them leaving a project.