These days a language’s ecosystem of add-ons, such as packages, is often more important than the features provided by the language (which usually only vary in their syntactic sugar, and built-in support for some subset of commonly occurring features).

Use of a particular language grows and shrinks, sometimes over very many decades. Estimating the number of users of a language is difficult, but a possible proxy is ecosystem activity in the form of package growth/decline. However, it will take many several decades for the data needed to test how effective this proxy might be.

Where are we today?

The Module Counts website is the home for a project that counts the number of libraries/packages/modules contained in 26 language specific repositories. Daily data, in some cases going back to 2010, is available as a csv

The following are the most interesting items I discovered during a fishing expedition.

The csv file contains totals, and some values are missing (which means specifying an ‘ignore missing values’ argument to some functions). Some repos have been experiencing large average daily growth (e.g., 65 for PyPI, and 112 for Maven Central-Java), while others are more subdued (e.g., 0.7 for PERL and 3.9 for R’s CRAN). Apart from a few days, the daily change is positive.

Is the difference in the order of magnitude growth due to number of active users, number of packages that currently exist, a wide/narrow application domain (Python is wide, while R’s is narrow), the ease of getting a package accepted, or something else?

is the number of days since 2010-01-01; the red line is the daily diff of this equation), while Ruby has been experiencing a linear decline since late 2014 (all code+data): 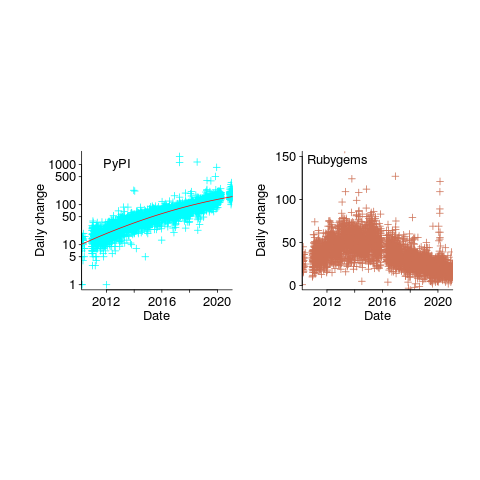 Will the five-year decline in new submissions to Rubygems continue, and does this point to an eventual demise of Ruby (a few decades from now)? Rubygems has years to go before it reaches PERL’s low growth rate (I think PERL is in terminal decline).

Are there any short term patterns, say at the weekly level? Autocorrelation is a technique for estimating the extent to which today’s value is affected by values from the immediate past (usually one or two measurement periods back, i.e., yesterday or the day before that). The two plots below show the autocorrelation for daily changes, with lag in days: 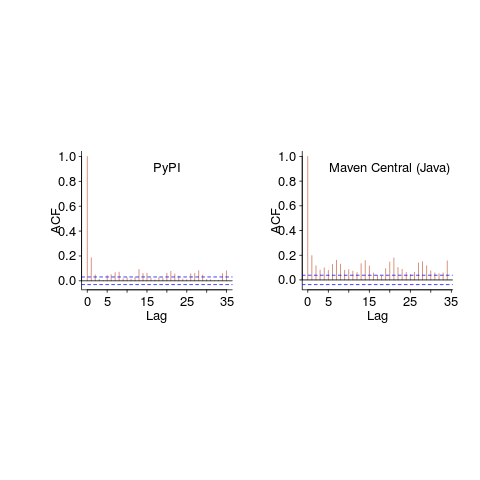 The recurring 7-day ‘peaks’ show the impact of weekends (I assume). Is the larger ”weekend-effect’ for Java, compared to PyPI, due to Java usage including a greater percentage of commercial developers (who tend not to work at the weekend)?

I did not manage to find any seasonal effect, e.g., more submissions during the winter than the summer. But I only checked a few of the languages, and only for a single peak (see code for details).

Another way of tracking package evolution is version numbering. For instance, how often do version numbers change, and which component, e.g., major/minor. There have been a couple of studies looking at particular repos over a few years, but nobody is yet recording broad coverage daily, over the long term

Perl, once the most widely used scripting language, has been in decline for many years; the decline now looks terminal (many decades from now, when its die-hard users have died), what happened?

Python is what happened. Why was this? Did Perl have a major fail, did Python acquire pixie dust that could not be replicated, or something else?

Some commentators point to the failure to produce a timely release of Perl 6; a major reworking of the language announced in 2000 with a stumbling release made available around 2015.

I think the real issue is a failure for Perl to take off outside its core use as a systems language. Perl is famous for its one-liners, but not for writing large programs (yes, it can be done, but would many developers would really want to?); a glance of the categories in its module library shows; those 174,970 modules (at the time of writing) are not widely spread over application domains (i.e., not catering to a wide audience).

Perl 5 was failing to grow outside its base before Perl 6 began its protracted failure to launch.

Language use is a winner take-all game, developers create more packages, support tools, and new users who combine to attract more developers. Continuing support for minority languages comes from die-hard users, existing software that is worth somebody paying to maintain and niche advantages.

These days, language success is founded on the associated package ecosystem (Go and Rust have minuscule package ecosystems, which is why they are living on borrowed time, other languages will eventually take away their sheen of trendiness). Developers use languages to build stuff, the days of writing the code for almost everything are long gone; interesting software is created by taking advantage of packages written by others. Python was in the right place, at the right time to acquire a wide variety of commercial grade packages.

It’s difficult to see Python being displaced as the lingua franca of software development. Its language features are almost irrelevant, its package ecosystem is everything. The winner will eventually take all.

I’m sure the cycle of languages becoming popular for a few years, before disappearing, will continue. There have always been, and will always be, fashionable languages.