Software developers are employed by organizations and people change jobs, either voluntarily or not; every year a new batch of people join the workforce, e.g., new graduates. Governments track employment activities for a variety of reasons, e.g., tax collection, and monitoring labour supply and demand (for the purposes of planning).

The US Bureau of Labor Statistics’ publishes a monthly summary of their Job Openings and Labor Turnover Survey. What can be learned about software development employment from this data (description)?

The data starts in December 2000, with each row contains a monthly count of Job Openings, Hires, Quits, Layoffs and Discharges, and totals, along with one of 21 major non-farm industry codes or one of the 5 government codes (the counts are broken out by State). I’m guessing that software developers are assigned the Information code (i.e., 510000), but who is to say that some have not been classified with the code for, say, Construction or Education and health services. The Information code will cover a lot more than just software developers; I’m trading off broad IT coverage for monthly details on employment turnover (software developer specific information is available, but it comes without the turnover information). The Bureau of Labor Statistics make available a huge quantity of information, and understanding how it all fits together would probably require me to spend several months learning my way around (I have already spent a week or two over the years), so I’m sticking with a prebuilt dataset.

The plot below shows the aggregated monthly counts (i.e., all states) of Job Openings, Hires, Quits, Layoffs and Discharges for the Information industry code (code+data): 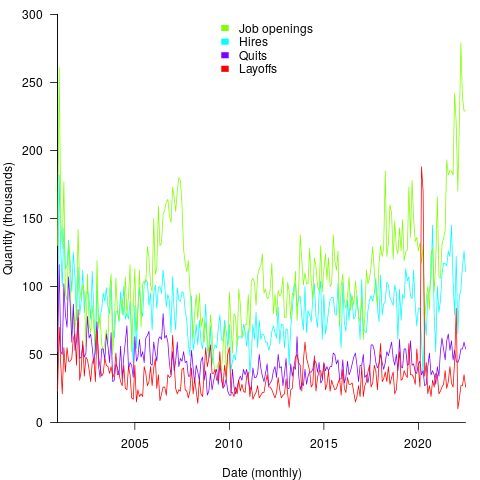 The general trend follows the ups and downs of the economy, there is a huge spike in layoffs in early 2020 (the start of COVID), and Job Openings often exceeding Hires (which I did not expect).

These counts have the form of a time-series, which leads to the questions about repeating patterns in the sequence of values? The plot below shows the autocorrelation of the four employment counts (code+data): 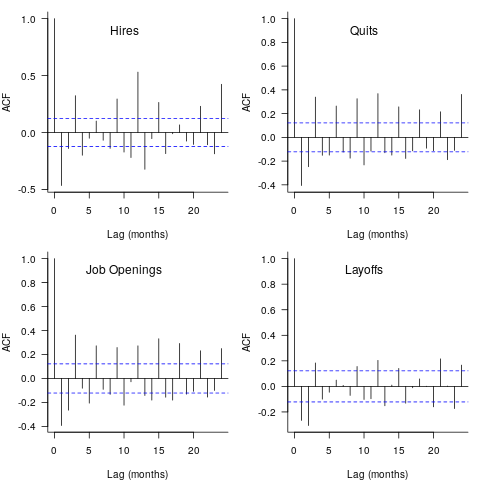 The spike in Hires at 12-months is too large to be just be new graduates entering the workforce; perhaps large IT employers have annual reviews for all employees at the same time every year, causing some people to quit and obtain new jobs (Quits has a slightly larger spike at 12-months). Why is there a regular 3-month cycle for Job Openings? The negative correlation in Layoffs at one & two months is explained by companies laying off a batch of workers one month, followed by layoffs in the following two months being lower than usual.

I don’t know much about employment practices, so I won’t speculate any more. Comments welcome.

Are there any interest cross-correlations between the pairs of time-series?

The plot below shows four pairs of cross correlations (code+data): 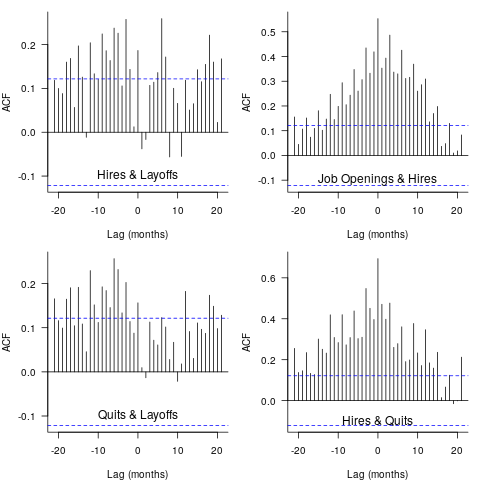 Nothing in this analysis surprised me, but then it is rather basic and broad brush. These results are the start of an analysis of the IT employment ecosystem; one that probably won’t progress far because of a lack of data and interest on my part.

Lately I have been encountering non-young people looking to switch careers, into software development. My suggestions have centered around the ageism culture and how they can take advantage of fashions in software ecosystems to improve their job prospects.

One consequence of the preponderance of the young is that people are heavily influenced by fads and fashions, which come and go over less than a decade.

The perception of technology progresses through the stages of fashionable, established and legacy (management-speak for unfashionable).

Non-youngsters can leverage the influence of fashion’s impact on job applicants by focusing on what is unfashionable, the more unfashionable the less likely that youngsters will apply, e.g., maintaining Cobol and Fortran code (both seriously unfashionable).

The benefits of applying to work with unfashionable technology include more than a smaller job applicant pool:

Unless you want to be competing for a job with hordes of keen/cheaper youngsters, don’t touch Rust, Go, or anything being touted as the latest language.

Databases also have a fashion status. The unfashionable include: dBase, Clarion, and a whole host of 4GL systems.

Be careful with any database that is NoSQL related, it may be fashionable or an established product being marketed using the latest buzzwords.

Testing and QA have always been very unsexy areas to work in. These areas provide the opportunity for the mature applicants to shine by highlighting their stability and reliability; what company would want to entrust some young kid with deciding whether the software is ready to be released to paying customers?

More suggestions for non-young people looking to get into software development welcome.

Why do so few software development teams regularly attempt to estimate the duration of the feature/task/functionality they are going to implement?

Developers hate giving estimates; estimating is very hard and estimates are often inaccurate (at a minimum making the estimator feel uncomfortable and worse when management treats an estimate as a quotation). The future is uncertain and estimating provides guidance.

Managers tell me that the fear of losing good developers dissuades them from requiring teams to make estimates. Developers have told them that they would leave a company that required them to regularly make estimates.

It is not difficult for developers to get a general idea of how their salary, working conditions and practices compares with other developers in their field/geographic region. They know that estimating is not a common practice, and unless the economy is in recession, finding a new job that does not require estimation could be straight forward.

Management’s demands for estimates has led to the creation of various methods for calculating proxy estimate values, none of which using time as the unit of measure, e.g., Function points and Story points. These methods break the requirements down into smaller units, and subcomponents from these units are used to calculate a value, e.g., the Function point calculation includes items such as number of user inputs and outputs, and number of files.

How accurate are these proxy values, compared to time estimates?

As always, software engineering data is sparse. One analysis of 149 projects found that

, with the variance being similar to that found when time was estimated. An analysis of Function point calculation data found a high degree of consistency in the calculations made by different people (various Function point organizations have certification schemes that require some degree of proficiency to pass).

Managers don’t seem to be interested in comparing estimated Story points against estimated time, preferring instead to track the rate at which Story points are implemented, e.g., velocity, or burndown. There are tiny amounts of data comparing Story points with time and Function points.